Controls for Seven: The Days Long Gone will be shown in this page. 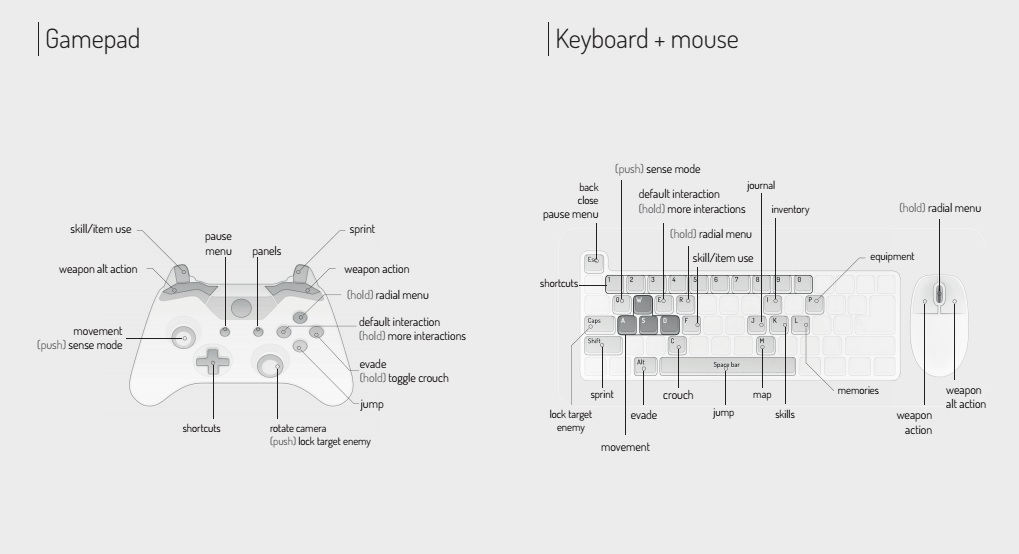 To move, use direction keys or analog.

To move faster, hold SHIFT. You will automatically climb low obstacles while sprinting.

to Climb, get close to a ledge and press space while moving towards the ledge.

Climbing and Looking through windows

You have the ability to look and climb through windows. It is often wise to have peek inside the room before climbing through a window.

To LOOK THROUGH a window, hold E and when the prompt pops up, select LOOK from the radial menu.

To CLIMB THROUGH a window, press E.

DROPKICK and JUMPTHROWS are special abilities unlocked by a passive upgrade, which allow throwing opponents from heights and leaving them open for finishers.

To perform a DROPKICK, run towards a humanoid enemy and press SPACE, and while in the air press LMB. This will knock your opponent down, leaving an opening for a finisher.

To perform a Jumpthrow, sprint towards a humanoid enemy by holding SHIFT, press SPACE, and while in the air press LMB. this will knock your opponent down.

You can grab ledges both while jumping and falling. Sometimes, the distance between two obstacles may be too high to land on your feet but you will automatically grab a ledge and pull yourself up provided that the ledge is within reach.

ROLLS and DASHES are an excellent way of avoiding incoming melee or ranged attacks. Keep in mind that these moves cause fatigue.

To perform a ROLL or a DASH, press directional key or analog and ALT.

DASH is a close-combat substitute of rolling. ROLLS are automatically switched into DASHES while in melee range.

SLIDE is another way of avoiding damage but can also be used offensively to knock an opponent backwards.

To perform a SLIDE, press ALT while sprinting.

To SNEAK, press C Your footsteps are silent while you are crouching. You can also move faster by holding SHIFT while crouched, however your footsteps may be heard from a close distance.

Keep in mind that SNEAKING in public spaces is an ILLEGAL ACTION and there will be consequences if somebody spots you doing it.

While moving silently, the silhouette is still visible so it is worthwhile to use the environment like bushes, piles of leaves, heaps of trash or to move behind cover to remain hidden.

Sense Mode can help you hod good hiding spots by highlighting them.

You have two basic types of attacks at your disposal.

To perform BASIC ATTACK, press LMB. These attacks form a combo. To perform another attack in the combo, press RMB at the right time.

Each weapon type has its own combo. special attacks. attack speed.

Teriel can perform: BACKSTABS and DROPKILLS with any melee weapon.

BACKSTABS are powerful assassination techniques performed on humanoids. To perform a BACKSTAB, approach your enemy from behind and press LMB.

Backstabs can be performed in combat as well. BACKSTAB without a weapon equipped will choke your target to sleep.

Keep in mind that BACKSTABS deal the most damage when the victim is unaware of your presence.

DROPKILLS are powerful assassination techniques performed from the air on both humanoids and monsters. To perform a DROPKILL, press LMB while above an enemy.

Keep in mind that some enemies will try to avoid this move if aware of your presence. Also, performing a DROPKILL from substantial heights may result in death.

These attacks are unlocked via passive skill upgrades.

You can combine defensive moves such as DASH and ROLL with an attack. To perform a DASH or a ROLL ATTACK, press LMB while Dashing or Rolling.

To perform a SPRINT ATTACK, press LMB while sprinting.

To perform a SLIDE ATTACK, press LMB while sliding.

To EQUIP an item, open the inventory panel by pressing I, now select an item you wish to equip, press E and select Equip from the scroll menu. The Equipment panel will open, select the slot you want to equip it to and press E.

Some weapon types and skills allow Teriel to apply KNOCKBACK and KNOCKDOWN effects to humanoid enemies.

Axes are one example of weapons with special attacks that deal high amounts of POISE DAMAGE, which can knockback or even knockdown an enemy. Lightly armored enemies usually have a lesser chance of avoiding KNOCKBACKS and KNOCKDOWNS.

KNOCKBACK can be turned into a KNOCKDOWN if your opponent hits a wall. KNOCKDOWNS can be used to perform FINISHERS.

FINISHERS are powerful moves performed on downed humanoid enemies. To perform a FINISHER, approach a downed enemy and press LMB with a weapon equipped.

Teriel is capable of parrying melee weapon attacks and riposting with some weapon types - e.g. sword and dagger. Riposte is a powerful move performed after a successful parry, which deals considerable amounts of damage.

Keep in mind that some special melee and monster attacks cannot be parried.

To PARRY, press LMB at the right moment while being attacked with a melee weapon. A successful parry will open an enemy for a riposte.

To RIPOSTE, press LMB after a successful parry.

You can equip weapons, traps, utilities, skills and other items to weapon and utility slots via the RADIAL MENU. To do this, open the RADIAL MENU by holding the R and select the item or skill using mouse wheel. Once something is selected just release the R. The object you have selected will appear in the appropriate slot

You can also bind weapons, items and skills to hotkeys For this, open the RADIAL MENU, select the item or skill and press 1, 2, 3, 4.

You will also have ranged weapons at your disposal.

Ranged weapons can be shot while aiming or without it.

Keep in mind that some ranged weapons need to be reloaded before shooting and cause fatigue as energy weapons use up your energy when fired.

SOFT LOCK is an automatic aid, which engages while close to an enemy and rotates your character towards it.

SOFT LOCK disengages automatically if the enemy gets further away or you can quickly disengage it by holding the direction and sprint buttons at the same time.

While an enemy is SOFT LOCKED, you will perform dashes instead of rolls and automatically aim ranged weapons and skills at this enemy.

HARD LOCK is a toggleable aid, which targets and locks onto an enemy for you. To HARD LOCK, press CAPS when near an enemy.

While an enemy is HARD LOCKED, dashes will replace rolls Also, ranged weapons and skills will be automatically aimed at this enemy.

There are two circular icons on the bottom left corner of your screen. These icons represent weapon and utility slots. Only items or skills, which are in these slots can be used.

The Weapon slot shows you the current active weapon.

Traps can also be encountered in the world, these traps are usually placed around guard posts and heavily guarded areas.

Your multi-tool can not only drill locks but also disarm traps.

To Disarm a trap, approach it and press E.

Disarmed traps will be placed in the inventory.

You can also disarm your own traps.

To equip a Trap, press P While in the Equipment Panel select a usable slot, press E, select a trap from the list and press E again.

Switches are devices, which control the power of devices connected to them. You can gain access to a switch with an appropriate KEYCARD or by hacking it. Once the Switch is accessed, you can disable or enable all devices that are connected to it.

To access a switch with a KEYCARD, approach it and hold E. Using mouse wheel select the Keycard icon from the radial menu.

If you don't have a valid keycard for this switch, a hacking mini-game will initiate

In the game there is a full day-night cycle and people read to the time of day.

Citizens work during the day, relax at a pub in the evening and sleep at night Guards will shift watches (what can be used by a cunning thief) and generally see less during the night.

Weather conditions such as rain can also ailed perception During these conditions, they will see and hear less. So, ideal heist circumstances are a rainy or stormy night.

You can also fast-forward the time whenever you please. To do this, activate Sense Mode by holding 0 and hold E.

You can also fast-forward the time to shorten the waiting period before guards go back to their normal state after being alarmed.

It is wise to make sure that enemies are not around you or that you are well hidden before fast forwarding.

Weather conditions such as storm and rain have a big impact on people's perception. During these conditions, they will see and hear less. So, ideal heist circumstances are a rainy or stormy night.

The camera can be rotated 360 degrees around your character. The camera will automatically rotate towards the direction you are currently moving unless rotated differently.

To rotate the camera, use Mouse Wheel.

You can replenish your health and energy quickly with the help of items such as: Food, Drink, Plants and Syringes. The fastest way to use them is to bind a consumable to one of the four consumable slots available to you.

To equip a Consumable, press P. While in the Equipment Panel select the consumable slot and press E, select a consumable from the list and press E again. The consumable will be bound to the selected slot. To use this item, open the radial menu by holding R.